This is a text widget, which allows you to add text or HTML to your sidebar. You can use them to display text, links, images, HTML, or a combination of these. Edit them in the Widget section of the Customizer.

After several weeks of dry and mild weather, the pattern is beginning to change rapidly as we head toward the Thanksgiving holiday weekend. After all, what would be a Thanksgiving holiday without a storm to talk about, right? The latest GOES 17 satellite image shows a what is the beginning of a strong low developing in the Gulf of Alaska. As can be seen, there is a significant low northwest of the Hawaiian Islands and a decent subtropical moisture tap well to the west. 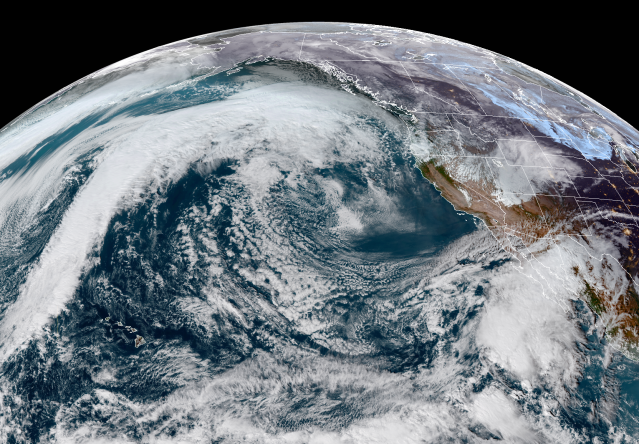 The latest upper air analysis showing the big picture reflects a rather impressive 150-170+ knot jet diving southeast along the western North American continent into a trough located currently over the western US. This pattern looks to remain progressive, with the upstream low beginning to drop south from the Alaskan coast south into the Pacific Northwest by Tuesday afternoon. 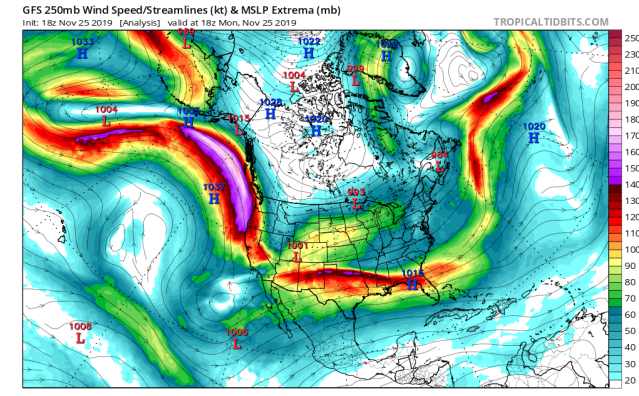 Looking ahead to the forecast, the latest 18Z GFS development of a surface low dropping out of the Gulf of Alaska expected to undergo extreme cyclogenesis, with a surface pressure dropping as much as 30mb – 40mb within 24 hours. Hurricane force winds are possible as it approaches the northern coast of California. Winds in the local valleys of the Reno/Carson City/Minden/Gardnerville areas will not likely be as strong but will be in the 15-25 mph range, with gusts to 35 mph as the system approaches. Temperatures will be in the low to mid 40s ahead of the front before the colder air moves in late in the day on Tuesday. 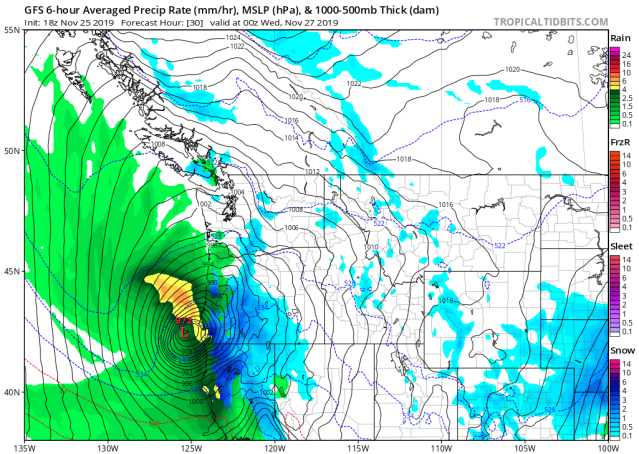 For the most important part of the storm is the current projections for precipitation. The latest information received from the National Weather Service in Reno is indicating snowfall totals of 6-8 inches for Tuesday night into Wednesday for the Carson City area, with around 2-3 inches in the local Reno area. Much greater amounts are expected for the Sierra and Carson Range of 12-18 inches or more around Lake Tahoe level and 1-2 feet above 7,000 feet. Locally up to 3 feet are possible over the highest elevations and mountain passes. 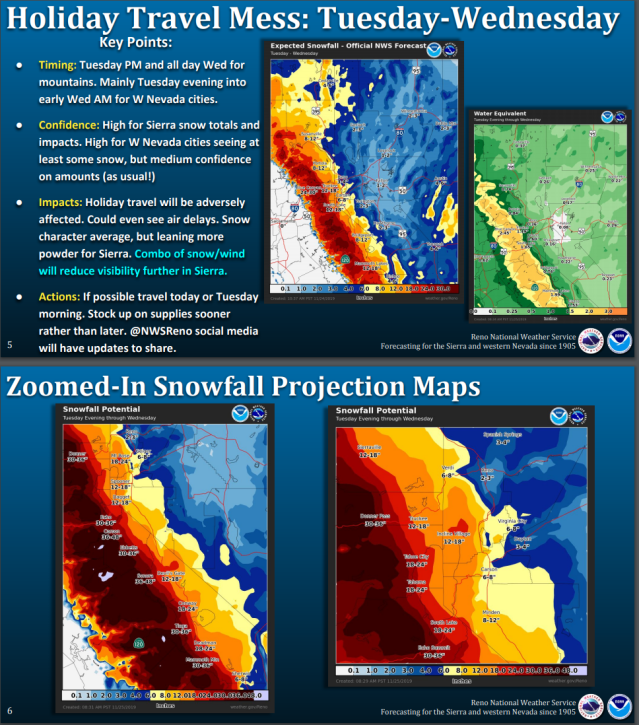 If that isn’t enough, additional accumulations of snow are possible Thursday into Friday as snow showers continue to move through the local area. There is still some uncertainty, but there is the potential for lake effect/lake enhancement from Lake Tahoe from southwest Reno into the Carson City area during the period. This may bring some additional accumulations of snow for Thanksgiving Day into Friday, with another 1-3 inches. 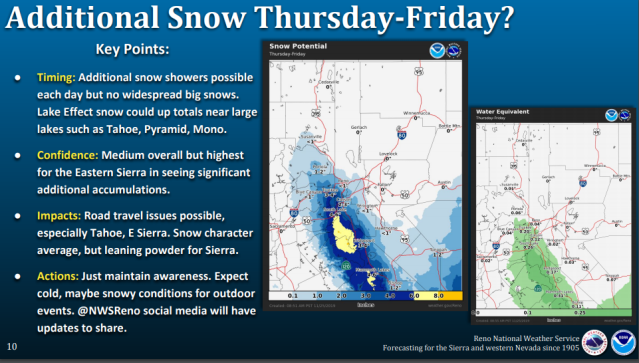 Looking ahead to the end of the Thanksgiving weekend, another potentially significant storm may affect the area beginning Saturday afternoon into early next week, some of the latest projections suggest another several inches of snow are possible in the valleys of western Nevada with much higher amounts in the Sierra. The NWS in Reno has added some probabilistic snowfall potential for this storm. 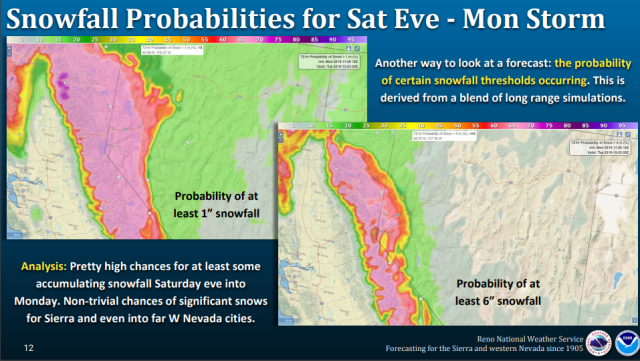 For the total QPF expected through the next week continues to show about 2-4+ inches of liquid for the Sierra and ½ to 1 inch of QPF the Sierra front including the valleys of western NV. Looking further out, the weather pattern continues to suggest above normal probability of precipitation. 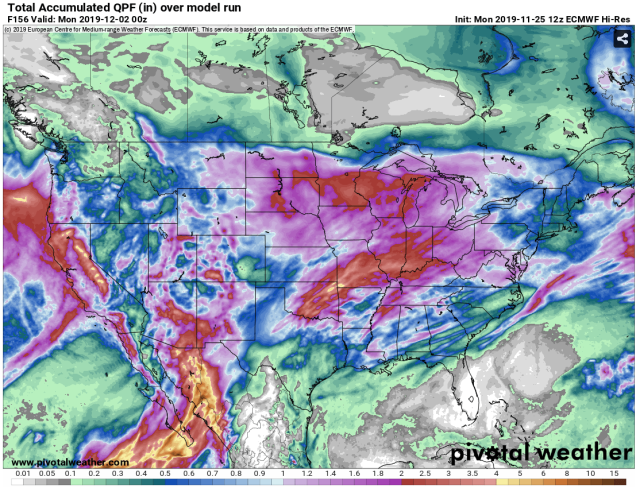 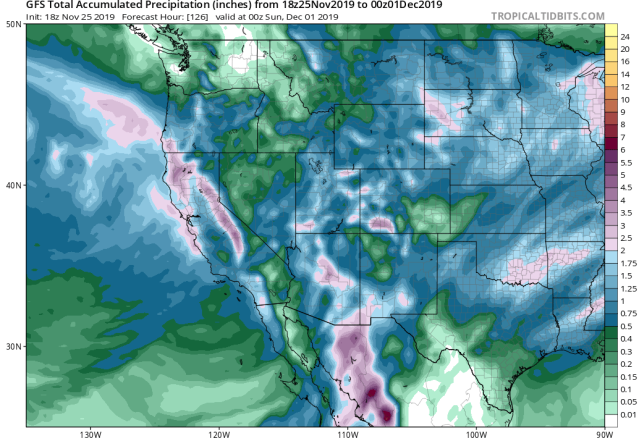 Overall, it’s looking like a very active period for the west coast and with the current forecast for precipitation, this should bring an end to the fire season over California and Nevada. This will hopefully begin a decent start to the Sierra snowpack and water supply situation after a couple of very dry months.